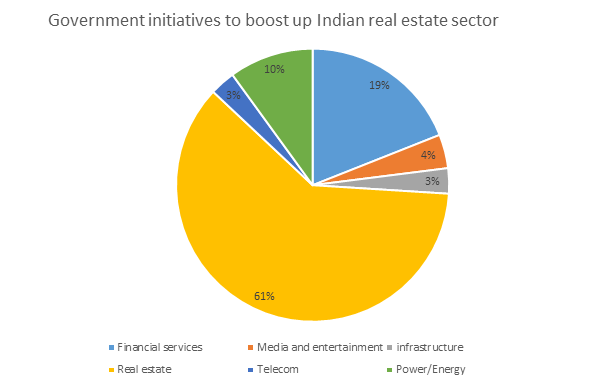 Real Estate is seen as one of the most revenue generating sectors of any country. Its growth as well as downfall both affects the economy of the country. In India, which is a developing economy, the role that real estate plays is very vital. So, government keeps a proper track of the development in this sector. Every year, new policies and laws are made and implemented by the government in order to bring in growth in the real estate. All these policies ease the investors as well as buyers thereby boosting the real estate growth. Here, in this write up we will let you know about the recent initiatives taken by the government to bring in hike in the real estate sector.

The steps taken are: In order to give impetus to the growth of Real estate market, the government has taken several initiatives like:

Steps that Ministry of Commerce and Industry has taken: It has speeded up the development of SEZs by making the procedure of getting the tax-free industrial enclaves notified easier thereby easing the developers.

Government churns out huge amount of profit of real estate sector so it ensures that the investment in it is done without many obstructions. Apart from the above mentioned initiatives, there are various others that the government of India has taken to boost the growth of real estate.

Government Initiatives to Boost up Indian Real Estate Sector   (Average Rating per Visitor : out of 5, reviews)