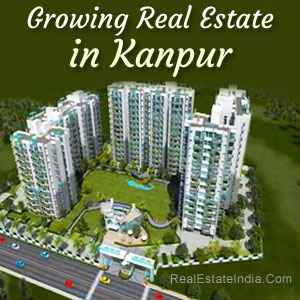 Amidst the largest city of Uttar Pradesh, Kanpur spontaneously reminds us about the Ganges. Leaving aside the religious importance of this place, Kanpur is India's chief industrial center. Spanning over an area of 260 sq km., Kanpur is divided into 6 zones and 110 wards with an average population of 20,000 to 27,000 per ward. Kanpur is well-connected with major metro cities like Delhi & Kolkata through National Highways. Also, this city is connected with almost all major cities and centers in India through the ever expanding rail routes. It is due to the location advantages of 2 major National highways and rail routes that today, Kanpur has evolved as a central industrial hub.

The growth of Realestate in Kanpur can be attributed to the development of the following factors:

Due to these factors, a large number of residential projects are being developed in the city, which are giving rise to the demand of affordable 2-3BHK to luxury apartments. As a matter of fact, Real Estate Agents in Kanpur today offer quality accommodation to suit all kind of budgets.