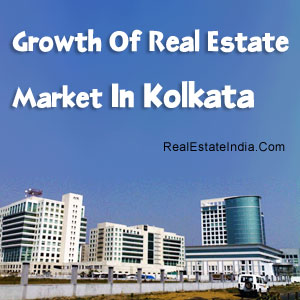 Kolkata is one of the fastest growing metropolitan cities of India. The city has grown considerably in terms of population and size after independence. Being the commercial capital and IT hub of Eastern India, Kolkata has surely come far in terms of development. With many shopping malls, multiplexes, cinema hubs and sky-scrappers, the city stands tall on India's map in terms of infrastructure. Apart from all these developments in various fields, the Real Estate Sector is also experiencing ample amount of development in Kolkata.

The main reason behind the development of Real Estate in Kolkata is the easy availability of land, which is the foundation of Real Estate Development in any city. This availability of land is increasingly being cashed on by many Real Estate Developers and Investors. The Realty Market of Kolkata is highly stable, which makes it the best realty destination for Developers and Investors in India. The rate of land and the rents of residential apartments and office spaces in Kolkata are much lesser than that of other metropolitan cities such as Mumbai and Delhi. The availability of Land at cheaper rate has immensely contributed in the development of Kolkata's Realty Sector.

Kolkata is one-stop destination for property buyers. It has emerged as a great place for those who want to buy their first dream home and don't have much money to invest. Apart from attracting the small-scale investors, Kolkata is also attracting the large-scale businessmen who are ready to invest huge amount of money on premium Residential and Commercial Projects of the city. The various policies that are implied by the Government on Realty Sector are also substantially helping in development of this domain. Therefore, Kolkata City is becoming a major metropolitan headland of Realty Sector in India.

Growth Of Real Estate Market In Kolkata   (Average Rating per Visitor : out of 5, reviews)