GST: A Boon Or Bane For Home Buyer in India? 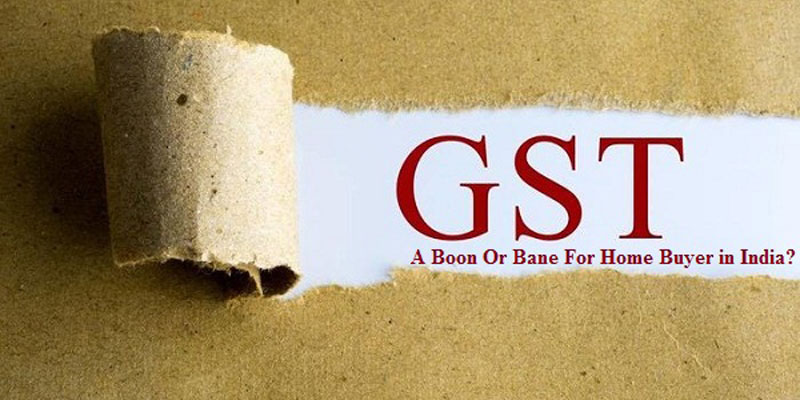 The revolutionary tax reform, Goods and Services Tax aka GST, was finally implemented in India on July 1, 2017. This new taxation regime is set to replace the multiple levels of taxation that were earlier followed in India. After a slow-down in the real estate sector due to demonetization, the real estate gurus had high expectations from this new tax rule to bring the real estate market back on track. After the tax implementation, the Prime Minister Narendra Modi led government came up with several amendments and changes to ensure that it runs parallel with the government’s ‘Housing For All By 2022’ dream. Recently, the GST Council recommended a 12% concessional rate of the houses that would be constructed under the Credit-Linked Subsidy Scheme. This move again proves how the government is stepping up to provide affordable houses for all, especially the Economically Weaker Section (EWS), Lower Income Group (LIG), and Middle Income Group (MIG).

Before the implementation of GST, builders and developers had to pay service tax and variable VAT rates across the state, which led to the overall tax payable tax touch range anywhere between 5.5% and 10%. They had to bear other non-creditable tax costs like customs duty, excise duty, entry tax, and CST. Other than that, they had to pay tax on the construction materials like steel (17%), cement (24%) and other imported building materials like doors, rails, windows, and wooden & metal goods etc. The multiple layers of taxes, the builders and developers had to pay, led to cascading of taxes, which was eventually reflected in the higher cost of the property. GST would remove these numerous taxes and replace them with a single one. The government has kept real estate tax under the 18% slab while treating the under-construction building as a supply of services. The benefit of the single tax would be passed on to the home buyer in India and would regain their trust in the industry.

Impact Of GST On Indian Real Estate
Ever since the new tax rule for GST was implemented in the country on July 1st, the real estate industry has been buzzing with its probable impact. Before this new tax regime, the real estate industry has been facing issues of cascading of taxes and multiplication of taxes which amounts to nearly 25% of indirect tax.

With GST, the builders and developers will get full tax credit input on the GST they pay for procuring input services, input materials, capital goods, consumables etc., for constructing the property. More than reducing the cost of buying home in India, the new uniform tax regime would boost transparency in the industry and put an end to the unscrupulous activities happening in this sector. The government is questioning the builders and developers in India to pay full compliance to the new tax rule and pass on any benefit they incur because of the lower tax rate to the buyers.

In the 25th GST council meeting held on 18th January 2018, the council put forward the suggestion to put real estate under the 12% tax slab instead of the earlier 18% one. Moreover, those purchasing property under the CLSS scheme (credit linked subsidy scheme) of Pradhan Mantri Awas Yojana would enjoy a concessional rate of 12%. Those registered under this CLSS scheme would enjoy even lesser GST rate when they plan to buy home in India. The applicable tax rate for the CLSS registered buyers would be 8% after deducting the one-third of the total amount towards the cost of land.

What The Home Buyer In India Needs To Know
The home buyer in India needs to understand the basics of the new Goods and Services Tax to ensure that he/she is not forced to pay higher tax or price for the home purchased. The builders and developers would enjoy lowered taxes and full tax credit input which would decrease the cost otherwise spent on the construction of property in India. The buyers need to understand the tax break up and smartly re-negotiate with the builders or developers to reduce the base price and not simply pay the new tax at the earlier base price. They need to understand the basic concept of credit tax input and all the other benefits that are accruing to new GST rate.

If any home buyer in India finds that he/she is not getting the full benefit of the lowered interest rate or is suspicious of any unscrupulous activity, he/she can file a complaint under section 171 of GST rules and regulations for illegal profiteering against the builder or developer.

Depending on how the home buyers treat the new GST tax regime, it can be termed as a boon or a bane for them. It would certainly be a boon for the home buyers who would readily negotiate the price and tax on their new homes after understanding the basics of this tax regime. Otherwise, it will still encourage the unscrupulous activities by the builders and developers who might ask even higher price due to the increased taxes, turning GST into a bane.

GST: A Boon Or Bane For Home Buyer in India?   (Average Rating per Visitor : out of 5, reviews)