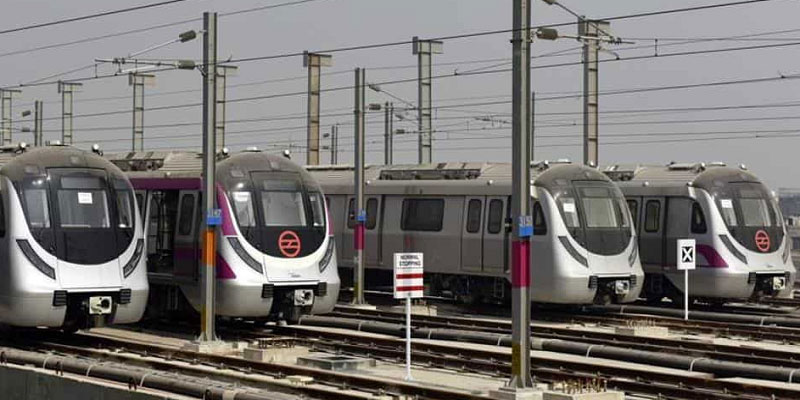 Here's good news for the people of Delhi NCR. On 7th March, the Union Cabinet approved the construction of Phase IV of the Delhi metro. Presently, the Delhi Metro has completed three phases of construction and has created a network that spans around 343.36 kilometers with 227 stations serving on the eight corridors. With the approval given for phase IV of the Delhi Metro, the overall length of the metro network would increase by 61.679 kilometers and have 46 more metro stations added to existing 227.

Evolution Of Delhi Metro: From Phase I To Phase IV
The construction of Delhi metro stated as early as 1998 with the red, blue and yellow lines. The Phase I of metro construction was completed in 2006 and had 58 stations, spanning a length of 65 kilometers. The second phase of Delhi Metro has extensions of the first three corridors along with new lines like the green, violet, and orange lines. The Phase II was completed in 2011 and has a 124.90 kilometers long network serving 86 new stations. The construction of Phase III of Delhi Metro began in 2011 and is expected to be completed by December 2020. While three new line, pink, magenta, and gray have been added in this phase, the existing lines had 11 extensions to different cities in the National Capital Region. This phase covered the development of 167.27 kilometers in the metro network. The Phase IV plan has been approved by Union Cabinet and the work has already initiated. While it was supposed to increase the metro network by 103 kilometers, the cabinet has only approved on the construction of 61.67 kilometers.

Phase IV Of The Delhi Metro
The government has passed the construction of phase IV of the Delhi Metro which would be completed at an estimated cost of Rs 25,000 crores. The phase would see the construction of three new corridors. In December 2018, the six proposed corridors of phase IV were given a go-ahead by the Delhi Government but the Cabinet has only approved three corridors which would cover 61.679 kilometers and have 46 metro stations. The construction has begun and the three corridors are expected to become functional by December 2024.

The Tughlakabad-Aerocity Corridor
Offering ease to the people of Faridabad and the Badarpur area, Tughlakabad-Aerocity would connect Tughlakabad to Aerocity. IT would make it easier to travel to Gurugram. It would be a 20.20 kilometers long stretch and have 15 stations. The stations covered in this metro corridor would be:

The Janakpuri-RK Ashram Corridor
The newly operational Magenta line would see an extension from its Janakpuri West terminal to the metro station on the blue line RK Ashram Marg. This would extend the Magenta line of Delhi Metro by 28.92 kilometers and add 25 stations. The stations covered in this line would be:

The Mukundpur-Maujpur Corridor
The third corridor of the Phase IV of Delhi Metro could connect the Mukundpur Metro Station would be the interchange point for changing for the pink line. It would be a 12.54 kilometers long stretch that would have 6 stations. The stations would be:

Impact On Property In Delhi & NCR
We all are aware that the onset of metro in Delhi has had a very positive impact on the city’s real estate. Not only have the prices of property in Delhi skyrocketed but the type of property, its amenities, technologies used, structure, and other things have also become world class. The extension of metro to various areas in the national capital region as well as the suburbs of the city has also seen a rise in property demand due to the smooth connectivity through metro. The number of real estate projects has boomed and builders and developers in NCR are showing more interest in delivering top-notch projects near the metro stations to cater to the growing population need.

With the completion of Phase IV of the Delhi metro, there would be a definite development in the areas connected by the three corridors. Moreover, it would also drive more demand for property and lead to a boom in the infrastructure and real estate of the areas.